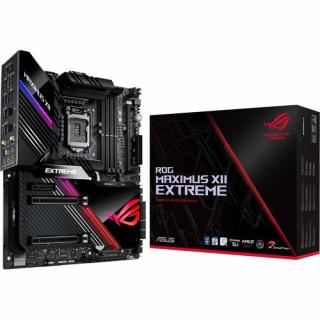 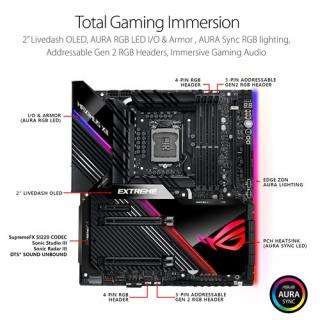 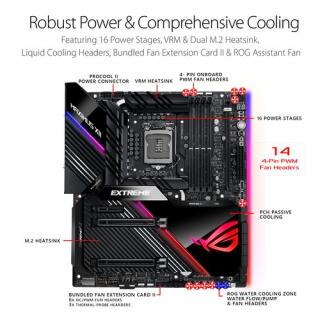 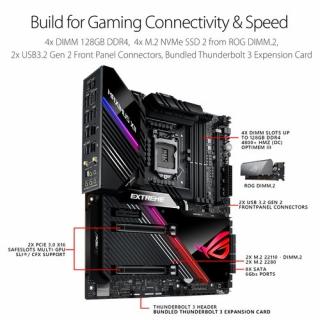 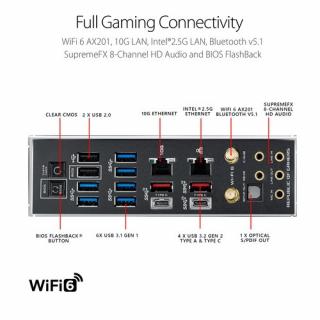 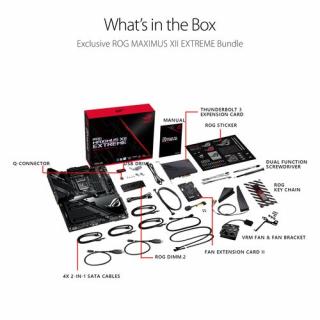 Expertly tuned by our ROG Engineers to bring you the ultimate performance. Made to be extreme as the name suggested, is positioned for max performance water-cooling enthusiasts. Combining hardware and software, to achieve optimized overclocking, high-speed memory support and comprehensive water and fan cooling controls, Maximus XII Extreme delivers ultimate performance combined with efficient, reliable operation.

Tuning is now faster and smarter than ever before. AI Overclocking profiles the CPU and cooling to predict the optimal configuration for each system.

AI Cooling automatically manages and controls motherboard connected fans, ensuring the most efficient settings depending on the current system load and temperature.

Maximus XII Extreme is the ideal foundation for your dream gaming build. An intelligent voltage-regulator module (VRM) design and high-quality components ensure that you'll get the most out of demanding latest-generation Intel processors. More firepower and an overclocking edge are yours with Maximus XII Extreme.

We became the first manufacturer to implement phase-doublers when we shipped our A8N32-SLI Deluxe motherboard, back in 2005. The board's VRM was lauded for elegantly overcoming the power handling capabilities of components that were available at the time and also reducing voltage ripple. Those benefits led to phase-doublers becoming universally accepted in the industry, and they are still used for similar purposes today.

A shift in CPU demands

However, today's CPUs now pack more cores than their predecessors, and the latest instruction sets allow them to crunch computationally dense workloads at an incredible pace. In addition, they consume less power at idle and can transition between load states much more quickly. These improvements necessitate a re-evaluation of power-design priorities because phase-doublers add a propagation delay that hampers transient response.

Fortunately, the latest integrated power components can handle higher currents than the devices of yesteryear, making it possible to implement a simple circuit topology that isn't hamstrung by the processing lag of phase-doublers. That's why ROG Maximus XII Extreme utilizes teamed power stages to deliver higher burst current per phase, while maintaining the thermal performance of phase-doubled designs.

Each VRM component serves a specific purpose. PWM controllers and phase-doublers control the circuit, and the power stages do the heavy lifting from an electrical and thermal standpoint. That's why ROG Maximus XII Extreme utilizes 16 power stages. The power stage sits at the top of Infineon's lineup and features a low RDSON to reduce switching and conduction losses, helping to improve overall thermal headroom.

Maximus XII Extreme delivers exceptional overclocking performance without requiring a fan for cooling. This is possible thanks to 16 teamed power stages running 90A MOSFETs on it VRM layout. To further improve heat dissipation, the I/O cover act as a large heatsink and there is also a heat pipe bridging the VRM heatsinks, increasing surface area and improving heat dissipation.

A VRM heatsink is placed on the MOSFETs and chokes, and the embedded heatpipe connects to the aluminum I/O cover.

An aluminum I/O cover is connected to the primary heatsink via an embedded heatpipe, increasing mass and surface area for dissipation.

The heatsink cover is crafted from pure aluminum to efficiently cool the two onboard M.2 drives.

The high-quality thermal pad improves overall heat transfer from the system by bridging the heat generated by the power stages to the heatsink.

A steel, cold-rolled coil construction backplate strengthens the motherboard to prevent bending, and adds additional mass to siphon heat from the VRM.

A chipset heatsink blends seamlessly with the aluminum heatsink cover and prominently features the ROG logo.

Dual water-temperature headers and a flow-rate header feed information straight into the AI Suite utility, allowing you to track coolant temperatures and the flow rate of the entire loop.

ROG Maximus XII Extreme includes the new Fan Extension Card II, which adds six headers that area controllable via FanXpert 4. The card features three temperature-sensor headers to complement the one available onboard, and also comes with three thermistors that can be affixed to different components. In addition to supplying extra headers for cooling, it provides three RGB headers to provide illuminated effects for your RGB fan.

ROG provides the tools needed to optimize your system quickly and easily. For those who relish complete control, the UEFI BIOS offers advanced customization options so you can tweak every aspect of your system.

The dashboard-style control panel of AI Suite 3 lets you fine-tune almost every aspect of your ROG Maximus XII Extreme system with ease. Get the best balance between performance, cooling, stability, and efficiency via one simple and intuitive interface.

The renowned ROG UEFI (BIOS) provides everything you need to configure, tweak, and tune your rig. It offers intelligently simplified options for newcomers to PC DIY, as well as comprehensive features for seasoned veterans.

Conventional motherboards use single-ended sensing tapped from a location that isn't ideal, leading to a large disparity between the actual voltage fed to the CPU and the value reported to software. Maximus XII Extreme features a differential-sensing circuit and delicate IC that simplify overclocking and tuning by allowing you to track voltages more accurately.

Designed to meet the demanding requirements of power users and content creators, 10 Gbps onboard Ethernet provides a new level of home networking. With up to 10X the bandwidth of standard gigabit Ethernet, you'll enjoy streaming uncompressed 4K UHD videos, and backups and file transfers that are faster than ever before.

Onboard Intel 2.5G Ethernet gives your wired connection a boost, with up to a 2.5X improvement over standard Ethernet connections for faster file transfers, smoother lag-free gaming and high-res video streaming.

At a breathtaking 40Gbps you'll experience faster transfers, with four times (4X) the data speeds of any other cable and twice (2X) the video bandwidth.

Maximus XII Extreme supports up to four onboard M.2 drives to maximize storage. Two can be found on the ROG DIMM.2 module, next to the memory slots, and supports drives as long as 110 mm. The other two can be found under the aluminum heatsink cover. PCIe support ensures compatibility with the very latest NVMe SSDs for ultrafast transfer speeds.

The ROG DIMM.2 module is an innovative expansion card that allows two M.2 drives to be connected via a DDR4 interface. You can then add a metal heatsink, helping to control thermals for maximum performance while elevating the aesthetics.

ROG SupremeFX audio technology has levelled up, delivering an exceptional 113 dB signal-to-noise ratio on the line-in connection to provide best-ever recording quality. There's also a low-dropout regulator for cleaner power delivery to the SupremeFX S1220 codec, an ESS ES9023P digital-to-analog converter for superior front-panel output, and a Texas Instruments RC4580 op amp for high gain with low distortion — all to deliver audio that envelops you as never before.

Allows you to easily identify audio ports and saves you from fumbling around in the dark.

Gear up with ROG components, from graphics and monitors to mice and keyboards. And up your game with complementary aesthetics, control and compatibility. The ROG ecosystem is more extensive than any competing brand, so enjoy greater choice as your system expands.

Sonic Studio supports HRTF-based (head-related transfer function*) virtual surround for headsets, casting an immersive aural landscape that draws you deeper into the action. The intuitive Sonic Studio interface also offers a range of EQ options and one-click presets, allowing you to tailor acoustics to suit personal preferences or the characteristics of your headset.

ROG Maximus XII Extreme includes a pre-loaded DTS Sound Unbound app that envelops you in audio as never before, conjuring whole new levels of immersion for extraordinary gaming and entertainment experiences. By exploiting Windows Sonic spatial technology, DTS Sound Unbound delivers audio in a virtual 3D space — putting you right in the middle of the soundscape, where you can sense the location and direction of every gunshot, footstep or other sound in your virtual environment.

Armoury Crate is a software utility designed to provide centralized control of supported ROG gaming products. From a single intuitive interface, Armoury Crate puts command of all your Aura gear at your fingertips with the new Aura Creator suite ready. The software also provides control of settings for a growing number of ROG products, making it easier to tune the look and feel of your system. Armoury Crate even offers dedicated product registration and ROG news feeds to help you stay in touch with the ROG gaming community.